My father had lived half his life before emigrating permanently, making the United States his home.   Almost forty, though no longer adorned with whatever resilience and sang-froid youth had bestowed, he engaged life in America with a spirit of hope which mystifies still, these decades after he has gone.

My mind summons our first house, brick, box-like, postage-stamp cubicle play yard, neighbor atop neighbor. Though he would, in time, acquire grander, this first house, just outside the city limits, announced achievement, proclaimed him resident in that new land.

Sadness in the sun-aged face, wary as the local journalist photographs his shining Chevrolet sedan. Pride, too true, it seems, a deadly sin. Thick blue bruise of paint spewed on the hood, bled down the side.  No witnesses, no crime, the police had said.

The sharp shock and sting of the stone that struck the head of the little girl walking home alone. Hateful slur followed  but not the boys who propel the now familiar call: “Go back where you came from, Go back there! We don’t want your kind here!”

I will never forget, near ecstasy on my father’s face the night a man, exuding youth and hope,  was elected President of the United States:   that man who looked like him and spoke like him, who was not afraid to say he actually was like him, he worshiped like my father. At times, it seemed to me, my father worshiped him.

Not much later, my father renounced the citizenship of the beloved land of his birth; he identified as a full American along with my older sister, who also had been born abroad.  The house he shared with my mother was filled with the young president’s photograph; his recorded speeches were played instead of the radio on Sunday afternoon, and when he was assassinated, a huge full-color bust portrait hung in their home, displacing the Pope, for the rest of their joint lives.

My parents were Irish immigrants.

The taunt was “Shanty Irish.”

The President was John Fitzgerald Kennedy.

When I tell my immigration story, today, the reaction, largely, is to question: how did my parents find such a bizarre pocket of anti-Irish feeling to settle? We no longer recognize ourselves in that tale.  We have forgotten the vitriol of the 1960 presidential campaign, the genuine anti-Catholic prejudice Kennedy faced down.   The lingering bigotry the Irish confronted  in 1960 seems impossible:  “No Irish Need Apply ” signs not yet quaint antiques for sale in the United States as  ” No Irish, No Coloured, No Dogs”  in Britain.

But the accommodation of forgetting cannot erase the dark reality of history.

Immigration policy is complex and important.It has become a throw away truism to state “we are a nation of immigrants.”

We serve ourselves well to recall that the children we revile today we may describe as “the bedrock of our society” tomorrow: as integrated and indispensable as though they always “belonged.” 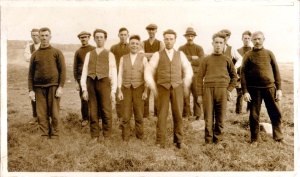 2 thoughts on “Suffer the Immigrants…”